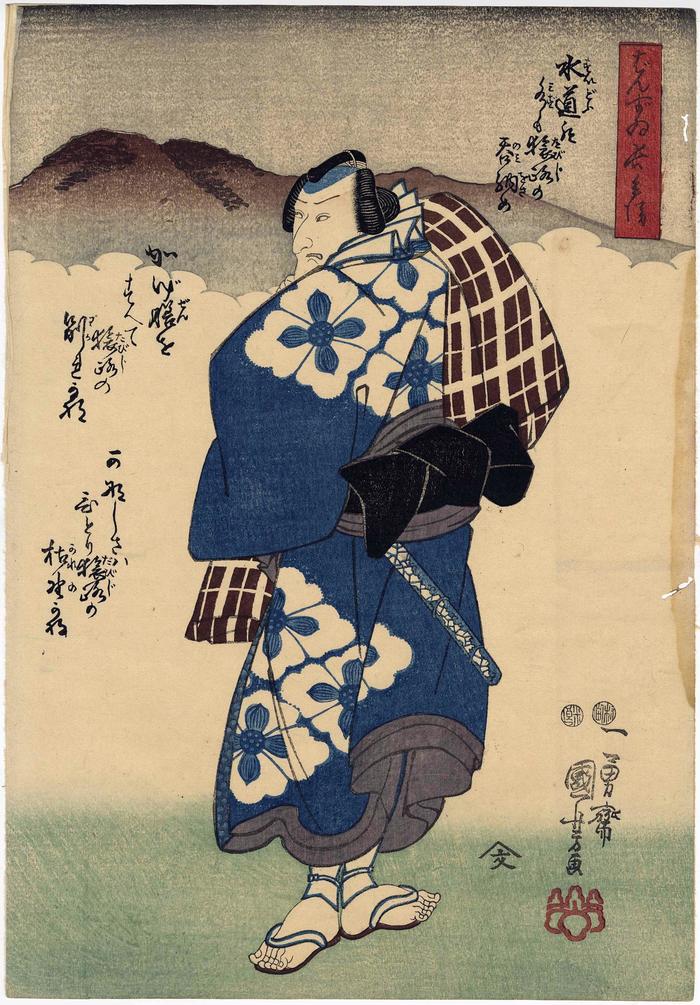 In a later play by Mokuami the National Theater of Japan describes Banzui Chōbei as: "...the boss of the Edo (modern-day Tokyo) Machi Yakko (a group of ruffian townspeople who wore flamboyant clothing) and a kyokaku who fights against the strong for the sake of the weak. He objects to a group of samurai being violent in a playhouse, and is called out by the samurai side, who resent this. Knowing that this is a trap, he says goodbye to his family, and goes to be killed with his head held high. The kyokaku upon whom he is modeled actually lived during the Edo period (1603-1868), and is said to have opposed a group of samurai with well over 100 followers."

"The actor, Matsumoto Koshiro V (1764-1838), is posthumously depicted in the role of Banzui Chobei, an otokodate (chivalrous commoner) from what is likely to have been a series of five related compositions of actors in otokodate roles. The theme of the otokodate in kabuki originated with the play Five Chivalrous Commoners (Shiranami gonin otoko), after which the tales and trials of righteous chonin (townspeople) became adapted to many other plays.

Koshiro is identifiable both by his remarkable nose, for which he earned the nickname 'Big Nose' Koshiro, and his four leaf mon, which is featured prominently on his robe. The actor was well-remembered for performing the role of Banzui Chobei, and sports Chobei's brown and white checkered kimono. In 1852, Utagawa Kunisada (1786-1865) simialarly portrayed the late Koshiro V in the role of Banzuiin Chobei and paired him with the also-deceased actor Iwai Tojaku (1776-1847) in the role of Shirai Gonpachi, Chobei's samurai companion. An 1833 diptych by Kuniyoshi depicts the actors Tojaku and Koshiro in their respective roles from the play Mitsuicho gozonji no edozome, performed at the Nakamura Theater in the 5th lunar month of 1833. Based on Kunisada's contemporaneous depiction of the pair of actors, as well as the striking similarity of the Chobei costume in Kuniyoshi's two depictions of Koshiro, one can entertain the notion that Kuniyoshi had that 1833 staging in mind when producing the posthumous portrait of Matsumoto 'Big Nose' Koshiro between 1847 and the early 1850s.

In Tōkaidō Texts and Tales: Tōkaidō gojūsan tsui by Kuniyoshi, Hiroshige, and Kunisada, edited by Andreas Marks, on page 41 it says: "The historical Shirai (in real life Hirai) Gonpachi was a highway robber who was executed on the third day of the eleventh month of 1679 and actually never met Banzuiin Chōbei (d. 1650). Their fictitious meeting was an invention of the kabuki theater and first appeared in the play Chopping Board for Banzui Chōbei's Lenten Fare (Banzui Chōbei shojin manaita), performed aat the Nakamura Theater in 1803. Shirai Gonpachi became the most popular motif in actor Tōkaidō series.